The reveal of the Volkswagen Amarok was one of the better executed unveilings at AIMS yesterday. Three different scenarios were presented, with a family beach holiday the most plausible. The other themes were a Dakar Rally inspired motorsport reveal and a suburban couple on their way to a romantic dinner, presumably. Although this was, perhaps, the least convincing scenario.

Interesting to note that no farmers or tradies were seen during this presentation. When you consider Volkswagen are expected to target the Hilux market quite aggressively this could be considered a questionable exclusion.

Inside the Amarok things look pretty good, for a work truck. But don’t go in expecting Golf or Passat level interiors. And whatever you do, do not, under any circumstances, choose the dual-tone grey and brown interior as seen inside the brown Amarok at AIMS. While some might consider the all grey/dark theme from the white Amarok on show a tad bland, it is, by far, the better option of the two!

The Amarok goes on sale in Australia next March and we’ll have full details as soon as Volkswagen Australia releases them. In the meantime you can see more pics from the motor show after the break. 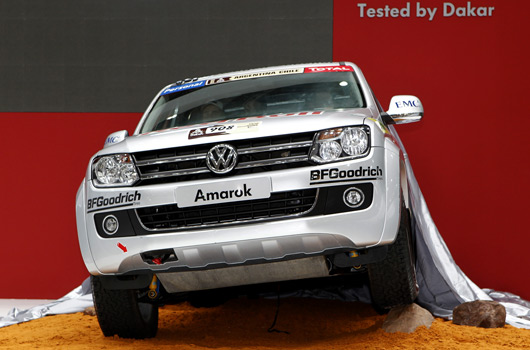 With the Volkswagen Amarok,Volkswagen Commercial Vehicles is showcasing the most advanced production ute to hit the Australian market in the first half of 2011. The Amarok boasts fuel efficiency, rugged good looks and uncompromising design and is sure to leave a lasting impression on visitors at this year’s Australian International Motor Show.

The highly advanced TDI engines of the Amarok – all boosted by direct injection – set new standards when it comes to fuel economy and emissions. The ute’s active and passive safety systems and convenience features all fulfil passenger car standards. Many of the technologies implemented in the Amarok are being used for the first time in the mid-size ute segment, including a bi-turbo charged, 120kW diesel engine in the Amarok TDI400. In terms of its space, load area width and height, cargo loading abilities and payload capacity, the new Amarok is “Best in Class”.

The Amarok begins its international career as a four-door Dual Cab with space for five adults. In both concept and style, the Amarok is clearly influenced by the new Volkswagen Design DNA. This is reflected in its typical emphasis of horizontal lines,in the well-defined interplay of body surfaces and high precision of its workmanship. Specifically, one of the most prominent identifying features is the visual unit formed by the horizontal headlights and radiator grille with its louvers and decorative trim accents. The cleanly sculpted curvatures of the Amarok’s side body panels and engine bonnet give it the typical rugged style of a ute. The Amarok’s exceptional interior dimensions make it the most spacious ute in its class. Easy entry, a generous seating layout and lots of head room characterise the workspace behind the wheel. Ample leg room on the rear bench also makes the Amarok a fully fledged five-seater. When only two persons are aboard, the fold-up rear seat and folding backrest increase interior cargo space.

The load area of the Amarok Dual Cab serves up the largest dimensions in its class as well. It measures 1,555 mm long by 1,620 mm wide,yielding an impressive load area of 2.52m2. And that’s not all. Also “Best in class” is the ute’s maximum load width of 1,222 mm between the wheel wells. For the first time on a mid-size ute it is possible to load Euro pallets (1.2 x 0.8 m) sideways, a space-saving feature. It is easy to transport sports equipment like motor bikes as well as bulky machinery, thanks to its large dimensions, load sill height of 780mm and payload capacity of up to 1.0 metric tonnes. Four lashing eyes at the corners of the load area secure cargo during the drive.

The safety package of the Amarok includes driver and front passenger airbags, there are also front seat head/thorax airbags. Also included are height-adjustable head restraints and three-point safety belts at all seating positions.

Numerous other features guarantee a high level of active safety as well. For example, the Electronic Stabilisation Programme (ESP) is standard equipment. Another feature contributing to safety is “Off-Road Mode” – activated by the press of a button – which is enabled up to a vehicle speed of 130 km/h. In this mode, the ESP system, Electronic Differential Lock (EDL), Anti- Slip Regulation (ASR) and Anti-Lock Braking System (ABS) are all tuned for challenging off-road conditions.

Full specifications and pricing of the Amarok will be released at launch in the first quarter of 2011.

You think the interior is a bit crappy? Have you been in a HiLux? How did it compare?