In case you’ve been hiding under a rock you’ll have heard that Lewis Hamilton was crowned Formula 1 World Champion yesterday in the most dramatic of circumstances. Needing to finish the race in the top five to fend off the points challenge from a dominant weekend by race winner, Ferrari’s Felipe Massa, Hamilton watched his title lead slip by when Sebastien Vettel relegated the Briton to sixth place with an overtaking move on the second last lap. This moment of high drama was only to be eclipsed by Timo Glock’s struggles in his Toyota on the last lap, which enabled both Vettel and Hamilton to pass and, crucially, slip Hamilton back into fifth position with just two corners remaining. And with that Lewis Hamilton won the 2008 F1 World Championship by the narrow margin of 5.4 seconds, the gap between himself and Glock back in sixth.

Speaking after the race Hamilton was quick to acknowledge those who have assisted him throughout his career, “The most dramatic race of my whole life. Itâ€™s pretty much impossible to put this into words: Iâ€™m still speechless. Itâ€™s been such a long journey, but Iâ€™ve always had the support of my family, the team, our partners and the fans. We did a fantastic job throughout the whole year and, with all the sacrifices we made, Iâ€™m so thrilled to be able to win this for everyone.”

Importantly, though, Timo Glock, too, was quick to put an end to the fantasy scuttlebutt that he somehow took a dive for the benefit Hamilton’s glory. Quoted on the BBC website, Glock explained, “Six laps from the end I asked about the tyre situation and about the weather conditions, and I said every time ‘I’ll stay out, one more lap, one more lap’ and at the end I stayed out (on dry tyres) for the whole race.

“That last lap just cost us the chance to be in the top five, and in the end (decided) the world championship. I think at the end I didn’t give the title to Lewis – I think they worked for that the whole year, and Felipe as well. They both did a really great job all year and in the end it was a dramatic finale.” 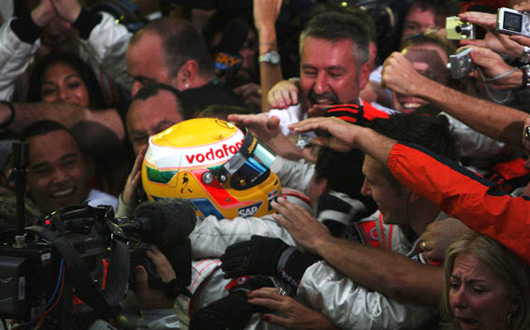 McLaren boss Ron Dennis spoke of the hope that Glock’s tyre situtaion gave his team, “Well, that was a really tough race. We never pushed hard, we never did anything silly, but of course the late rain made things extraordinarily tense. Even so, even when Sebastian got past Lewis, we never gave up, and Lewis never gave up, because we knew that Timo was on dry tyres. Lewis took his chance brilliantly, and the result was one of the most thrilling finishes in sporting history. Iâ€™m so proud of Lewis; Iâ€™m so proud of the team; everyone – every single one of them – did an absolutely fantastic job. Thanks, also, to Mercedes-Benz and all our partners – and, last but not least, congratulations to Ferrari on winning the constructorsâ€™ championship.”