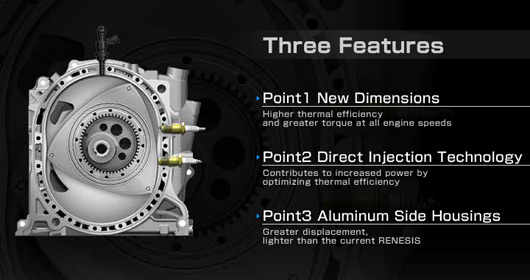 The demise of the rotary engine we wrote about just a few months ago is already over, The Motor Report states. After speaking to Nobuhiro Yamamoto, program manager of the MX-5, TMR says a new generation RX-7 awaits and the return of the much loved Mazda icon has been confirmed.

But you’ll have to wait until 2017 for the next-gen RX-7, which will base its engine on the Renesis 16X first revealed in 2007. The 1.6 litre rotary will be normally aspirated to begin with, although Yamamoto hasn’t ruled out turbocharging at a later date. In normally aspirated form, peak power could be as high as 220kW and will be tuned for linear power delivery and sharp throttle response.

The chassis for the RX-7 will be an adaptation of MX-5 architecture, allowing for an increase in size over Mazda’s small sports car. Yamamoto also revealed aluminium body panels will help reach a target weight of around 1250kg, nominating the Toyota 86 as a rough guide.

Pricing for the 2017 RX-7 is expected to sit in the premium category above the Nissan 370Z, for example.

2017 – seriously? It’d better be better than the FD or it had better wear a different badge…

No trackbacks for “Wankels at the ready, the RX-7 is coming back!”