Sebastien Ogier overcame a poor tyre choice on Day 1 to fight back and win the Rallye Monte Carlo in style, getting his world championship defence off to a near perfect start.

To rack up his first Monte win Ogier had to reel in an impressive Bryan Bouffier in his first outing at the wheel of a privately entered Ford Fiesta RS WRC. Bouffier’s name may be familiar to you, he was one of the test drivers who helped develop the Hyundai i20 WRC, so his second place result will be extra sweet after missing out on official driving duties with the Korean team this year.

Conditions during the rally were extreme and presented the drivers with all kinds of hazards, from ice, “shiny” wet patches on slippery tarmac, heavy rain and a snow storm just to top things off.

Kris Meeke took a big step in repaying Citroën’s faith and was delighted to overcome those difficulties unscathed on his way to satisfying third place. He leaves Monte Carlo with increased confidence, acknowledging he has no issue with raw pace, but has in the past made too many silly errors.

Robert Kubica may need to take a few notes from Meeke. The former F1 star was sure fast enough during the rally and was easily mixing it with the established WRC front runners. Yet, he still found his way off course and crashed into a bridge in a manner perhaps only Robert could. Thankfully the impact was at relatively low speed and he was in no real danger of any injury.

Jari-Matti Latvala finds himself in Ogier’s shadow once again, although he lost a bit of time on Day 2 with an annoying puncture. Latvala did register a small win over his teammate when he beat him to first place in the Power Stage by 0.2 seconds. Judging by the look on Ogier’s face immediately afterwards the world of motorsport has another Seb who doesn’t like losing one little bit!

Of course, Hyundai’s return to the WRC spotlight didn’t quite go to plan and they’ll be hoping for more in Sweden next month.

After the break there’s Volkswagen’s official word along with pictures and videos from the leading WRC teams. 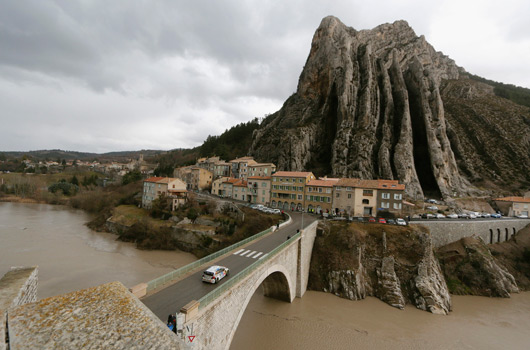 “Monte” victory! Dream start to the WRC for Ogier and Volkswagen

Triumph at the Rally Monte Carlo – Volkswagen opened the new season of the FIA World Rally Championship (WRC) with a dream result. Sébastien Ogier/Julien Ingrassia (F/F) produced an irresistible fightback and an outstanding driving display to secure victory on the first weekend of the 2014 season. The success at the “Monte” is their 17th victory in the WRC, and their tenth with Volkswagen. The win was the duo’s second at the rally classic, having previously won in 2009 when the event in the Mediterranean principality did not form part of the world championship. Second place went to Ford driver Bryan Bouffier, who won here in 2011, with Citroën’s Kris Meeke taking third.

The competitors at the notorious “Monte”, also known as “The Unpredictable One”, faced extremely difficult weather and road conditions. Rain in the valleys, snow at altitude – as has often been the case in the past, tyre selection was the decisive factor at the “Monte”. Volkswagen ended the classic with all three Polo R WRCs in the points. Jari-Matti Latvala/Miikka Anttila (FIN/FIN) and Andreas Mikkelsen/Mikko Markkula (N/FIN) picked up valuable points in fifth and seventh place respectively.

The sudden onset of winter in the French Maritime Alps and heavy rain in the valleys – the start of the Rally Monte Carlo literally caught everyone cold. Based on the weather data available, the Volkswagen drivers opted for virtually tread-free slicks for the first three special stages of the “Monte”. With the shock arrival of snow in the principality, this made driving a real challenge. Sébastien Ogier/Julien Ingrassia and their team-mates lost a lot of time in these conditions. The World Champions found themselves back in ninth place. They showed their undoubted class from the fifth stage onwards, however, finishing consistently in the top-three from then on in and winning seven special stages. By the midway point of the “Monte” they had moved into the lead and never looked back.

Weather conditions were so extreme that the 14th special stage of the Rally Monte Carlo had to be cancelled. So much snow fell on the notorious Col de Turini between the first and second loop on Saturday that the second run had to be neutralised, with some World Rally Cars stuck in the snow.

The comeback kid: Jari-Matti Latvala and the double fightback

Sébastien Ogier’s team-mates Jari-Matti Latvala/Miikka Anttila twice thrilled fans at the Rally Monte Carlo with a remarkable comeback. On the Friday of the rally, “JML” fought his way back from 18th to seventh place overall. He then climbed another position on Saturday, before a puncture saw him drop back down the field. However, he had battled back from eighth to fifth by the end of the day. Latvala/Anttila were in the top-three on eight of the special stages at the “Monte”, clocking the fastest time on three occasions.

Lessons learned, points scored – Andreas Mikkelsen’s first outing in a World Rally Car at the Rally Monte Carlo was rewarded with six World Championship points. Together with co-driver Mikko Markkula, Mikkelsen showed the necessary caution on all 14 special stages. However, even that was not enough on the tenth stage: on slicks at the time, Mikkelsen/Markkula slid slowly off the snow-covered road in a slow corner between Sisteron and Thoard. Despite losing a lot of time they were able to continue, with the help of the fans, and capitalised with a series of top times on the final day.

Victory at the first rally of the year and two bonus points on the Power Stage mean the reigning World Champions lead the WRC after the opening act of 2014. Sébastien Ogier and Julien Ingrassia leave their home rally with 27 points to their name, while Jari-Matti Latvala and Miikka Anttila are fourth with 13 points, courtesy of their Power Stage victory. Volkswagen also holds an early lead in the Manufacturers’ Championship: 37 points went to Wolfsburg, 33 to Citroën.

Sébastien Ogier, Volkswagen Polo R WRC #1
“What a perfect start to the season! The team did a fantastic job. I am overjoyed. It is an amazing feeling to win the Rally Monte Carlo in these difficult conditions – especially now that the Monte is a round of the World Championship again. For that reason, this win obviously ranks above the victory in the IRC in 2009 for Julien and me. Even more so when you consider the last three days: the fightback in extreme rain, and then the snow chaos on the Col de Turini. I really wanted to win my home rally here. I will celebrate the win appropriately – with my family, my girlfriend and the entire Volkswagen team.”

Jari-Matti Latvala, Volkswagen Polo R WRC #2
“I am really happy with fifth place. That was the goal we had set ourselves right from the word go. I have finally brought an end to my poor run at the Rally Monte Carlo. The conditions out on the route were very, very difficult in places – as was the tyre selection, which we did not get right at the start. The stages in the mountains were hard work, but it was worth it. We scored important points. I am particularly pleased with the extra points from the Power Stage. We now head to the Rally Sweden full of confidence.”

Andreas Mikkelsen, Volkswagen Polo R WRC #9
“An incredibly strenuous rally for us. There were so many conditions we had never come across before. Like many others, we found ourselves driving with slicks on snow and spikes in the rain. The tyre selection was definitely extremely difficult. However, I learned a lot at the Rally Monte Carlo. I am very happy that we finished in the points. That was always our goal, and I am still flabbergasted how difficult it was to achieve that goal.”

Jost Capito, Volkswagen Motorsport Director
“I am very proud of the entire team today. The drivers, co-drivers, engineers and mechanics all did an outstanding job. Sébastien Ogier’s performance was worthy of a champion, while Jari-Matti Latvala and Andreas Mikkelsen also did a magnificent job. Together with their engineers, and using the information available from the ice spies and weather crews, they always made intelligent tyre selections – even if they did not always turn out to be perfect. But that is just typical of the ‘Monte’, which is always unpredictable and temperamental. To have all three Polo R WRCs in the points and to have won the iconic ‘Monte’ for the first time as a team is an outstanding success.”

And then there was …

… Nicolas Vouilloz, the ice spy for Sébastien Ogier, who is known as the “inventor of tyre crossing”. In unclear and fluctuating weather conditions, rally drivers are increasingly opting for a mixed tyre set-up in a cross configuration. For example, slick and wet tyres are used at the same time, with slicks fitted on the front left and rear right, and wets in reverse. “We tried this out years ago at tyre tests with Michelin, and it worked better than having different tyres on the front axle to the rear axle. We were probably the first to use it in competition,” said the 37-year-old from Nice, who has proven to be more than adept at overcoming the extreme on two wheels too: Vouilloz was crowned World Downhill Mountain Bike Champion on ten occasions.