If you were after a little runabout in 1977 the cheapest new car on the market was the Leyland Moke ($2,995). On the other hand, if you were well to do, the most expensive car money could buy was the Bentley T or the near matching Rolls-Royce Silver Shadow (both $58,950).

The Moke was also the least powerful car on the market with just 37kW (50hp) on tap from its 1.0 litre four-cylinder engine. The leadfoots among you would have been more likely to have had your eye on the svelte 239kW (320hp) Maserati Khamsin, which would have set you back $44,000.

At least that’s the deal according to the July 1977 issue of Wheels magazine. You can check out the price list after the break and make sure you click on each image for larger images.

Turns out the Moke was the better buy, though. These days if you wanted to get your hands on a 37-year-old Moke you’ll likely need a lot more than the original three grand asking price. Whereas picking up a similarly aged Roller or Bentley should come in well under its original sticker price.

[Pics: Shannons | Thanks to Stu for the tip] 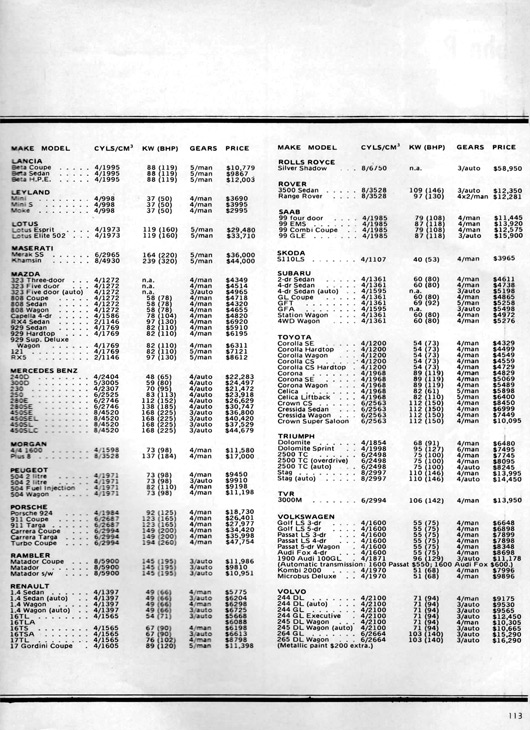 Crazy. Even to make a Moke from kit form using genuine BMC parts it is a costly exersize. I grew up hanging from the side of a Moke in Red and White, and would love one today. If BMW made a AWD retro MINI Moke priced right as a Sub-Brand of MINI, they would kill it!

The Golf was pretty exxy compared to the Corolla back then.