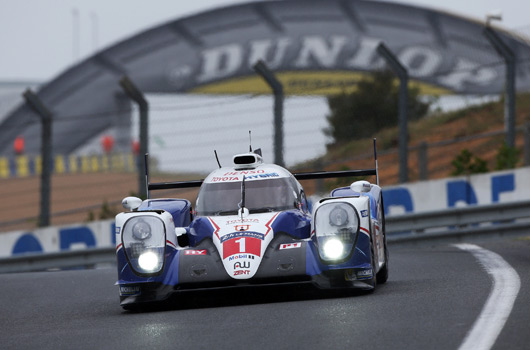 Toyota had great momentum throughout the latter stages of the 2014 WEC season, winning three of the last four races. Anthony Davidson and Sebastien Buemi were crowned world champions.

Unfortunately for Toyota that momentum has not carried through into the 2015 season. The team finished fifth and eighth at the season opener in Silverstone, although improved to finish third and fourth at Spa. But the TS040s were off the pace in the recent Le Mans official test session. Foxing? We don’t think so.

However, the great thing about Le Mans this year is that any of the four factory-backed LMP1 teams would make a wonderful winning story. And Toyota is clearly no exception there, it would be a well deserved win if Toyota can rise to the top step of the podium after the 24 Hours of Le Mans in 2015. It’s the only step on the Le Mans podium Toyota is yet to conquer.

We wish them well.

TOYOTA GAZOO Racing is prepared and ready for the highlight of the World Endurance Championship season; the Le Mans 24 Hours race.

Over 250,000 spectators will witness the 83rd running of the famous race around the 13.629km Circuit de la Sarthe, which is part public roads and part race track, with four LMP1 manufacturers doing battle to win the worldâ€™s oldest endurance race.

Kazuki returns to racing after a rapid recovery from a back injury sustained in practice for the Spa-Francorchamps race at the beginning of May. His recovery was confirmed with a trouble-free test on 31 May and he will race in his fourth Le Mans.

In the #2 car, two-time winner Alex Wurz is joined by three-time pole position man StÃ©phane Sarrazin and Mike Conway in his second start at La Sarthe, his first in LMP1.

This year marks a special anniversary for TOYOTA as it represents 30 years since the companyâ€™s first official entry at Le Mans. Coincidentally, that original 1985 entry featured Satoru Nakajima, the father of current racer Kazuki.

The 2015 Le Mans 24 Hours is the 17th time TOYOTA cars have entered the race over the past 30 years. Throughout the past 16 attempts, 40 separate cars have raced, with a best finish of second place (1992, 1994, 1999 and 2013). During that time, drivers such as ex-Formula 1 World Champion Alan Jones, F1 race winner Eddie Irvine and three-time Le Mans winner Allan McNish have driven TOYOTAs.

A year ago, the #7 of Alex, StÃ©phane and Kazuki started on pole and led for most of the race before an electrical problem forced its retirement, while the #8 of Anthony, SÃ©bastien and Nicolas Lapierre recovered superbly from an accident to finish third.

A difficult start to the 2015 season means TOYOTA travels to Le Mans searching for a first win of the year, knowing both cars face tough competition in the hotly-contested LMP1 category.

But thorough preparation and knowledge of the unique demands of Le Mans, as well as a positive test day last Sunday, mean the team heads to La Sarthe quietly hopeful that it will be a contender in the fight for honours.

As an event, Le Mans is a true endurance challenge, with almost 35 hours of driving until the chequered flag waves, starting on Wednesday 10 June with a four-hour practice session at 16.00 before two hours of qualifying begin at 22.00.

Qualifying continues on Thursday with a two more 120-minute sessions (19.00 & 22.00). The starting grid is decided by the fastest single lap from any of the qualifying sessions.

The traditional drivers parade in the city centre on Friday afternoon gives fans a unique chance to meet the drivers before race weekend, which begins with a 45-minute warm-up at 09.00. The race starts at 15.00 on Saturday.

Toshio Sato, Team President: â€œFirst of all, I speak for the whole team in saying how happy we are that Kazuki has recovered and can race with us at Le Mans. This shows his determination and spirit. Now our team is complete and we can take on the Le Mans challenge together. We have been preparing for Le Mans for almost a year so we are ready and motivated. The first two races did not go to plan so the team has worked incredibly hard back in Cologne to get the maximum performance from our Le Mans package. It has been a big effort and we hope it pays off at Le Mans. We do not start Le Mans as favourites but that does not affect our focus or our attitude. We will give everything for this race, with a target of zero mistakes and minimal time in the pits; I believe that with this approach we can challenge at the front. You can never guarantee anything in motorsport but we feel well prepared and I hope we can show this in the race.â€

â€œI am absolutely ready for Le Mans this year. I think winning the World Championship last year helps because I feel Iâ€™ve proved what I needed to in endurance. It meant really so much, not just for me, for the whole team as well. Obviously you want to win everything and Le Mans is something I really want on my CV; itâ€™s a challenge I want to overcome. Itâ€™s a fickle race which you canâ€™t control; you canâ€™t go there with a plan and expect everything to run smoothly. It just happens or it doesnâ€™t and unfortunately I havenâ€™t been lucky enough to win it yet. Iâ€™m much more relaxed this year and we go to Le Mans as underdogs so maybe thatâ€™s when it will finally happen for us.â€

â€œLe Mans is always a special moment in the season; being part of this unique race is always magical. The start of the race is a very special moment for me; thereâ€™s a big adrenaline rush and you fully understand that we are racing here in Le Mans. There are so many emotions. This year, we are in the role of underdogs so we have to take up that challenge and give it our best shot. Everyone is working very hard to reduce the gap with our rivals but Le Mans is a race like no other; there can be many surprises. We still hope to be at the front at the chequered flag; itâ€™s a long week and a long race so letâ€™s see what happens.â€

â€œI have already won my first race this season; recovering my fitness in time for Le Mans. I want to say a huge thanks to the doctors in Verviers and Nice, plus the team physios who have performed miracles to get me ready for Le Mans. Without their hard work, I could not have done it. Last year I got the pole position which was a special moment but not my main goal, which is of course to win. We unfortunately didnâ€™t achieve that so of course it is my dream for this year, even if we know it will be difficult. Everyone is really motivated and positive; we know from last year that there are no certainties at Le Mans so we hope to cause a surprise.â€

â€œLe Mans is finally here; this is the moment we been working towards for the past year. Itâ€™s the focal point of our racing season and, of course, an incredibly cool event with so much history. I have raced at Le Mans enough times to know that this race is full of surprises and nothing can be guaranteed in advance. The most important point is to focus on what we can control; find the right set-up for our car, get the right strategy and make no mistakes. This year we might not enter the race as favourites, unlike last year, but the race is long, mighty and brutal, so letâ€™s see who is where after 24 hours.â€

â€œLe Mans is an incredible, legendary race; the highlight of the year for me. The atmosphere and fans are amazing. When I am on the grid before the start of the race, with all the spectators in the grandstands, some of them shouting my name, and the French flags flying, this is a very special feeling. I canâ€™t believe this is my fourth Le Mans with TOYOTA; I have the feeling it was yesterday! Winning Le Mans has always been my goal and my wish is that 2015 can be the year. Everyone is pushing to the maximum and we will give everything, then we see what Le Mans will bring for us.â€

â€œIâ€™ve experienced Le Mans just once before but that was enough to know it is a very cool event with a unique atmosphere. During the week you can really feel how itâ€™s all getting busier and building up to the big race. When youâ€™re part of that, itâ€™s very special; the only event Iâ€™ve been part of that is in any way similar is the Indianapolis 500. The race itself is long and gruelling but when youâ€™re in the car, thatâ€™s when youâ€™re feeling at your best. I work really hard on my fitness so I feel ready and Iâ€™m looking forward to the challenge. Weâ€™re a strong team and I know everyone has done their maximum to prepare; now I canâ€™t wait for it to start.â€