The wraps have finally come off the Mercedes-AMG C63 Coupé and here it is! The overall shape of the C Class Coupé is proving to be a bit of an oddity here at AUSmotive HQ.

From most angles the shape looks very good. But from the three-quarter rear it just looks wrong—a bit too much like a GLE Coupé. And if there’s one thing a sporty Merc shouldn’t look like, it’s a bloated SUV.

That aside, the new C63 Coupé kicks goals everywhere else, mostly thanks to its 4.0 litre V8 biturbo. We’ve seen it already in the saloon and estate models and there’s been no tweaks to the key specs. That means the C63 Coupé has 350kW/650Nm and the C63 S (pictured) has 375kW/700Nm. They’re huge numbers!

This coupé is not exactly light, flirting with 1800kg, yet it can still reach 100km/h in only 3.9 seconds (C63 S). Top speed is limited to 250km/h, but can be raised to 290km/h with the optional AMG Driver’s Package (presumably that’s not an extra large set of balls).

As far as styling goes the C63 Coupé has had its wheel arches pumped up. They’re 64mm wider at the front and 66mm wider at the rear. The increased track affords improved handling as well as beefy looks.

Rear traction is aided by an old skool mechanical limited-slip diff on the C63, while the C63 S gets electronic trickery. Mercedes-AMG says the rear axle has been redesigned for the C63 Coupé and the electronic diff yields more sensitive and faster responses compared with the mechanical version.

The Mercedes-AMG C 63 Coupé will make its world premiere at the Frankfurt Motor Show on 15 September. European sales release will commence from March 2016. 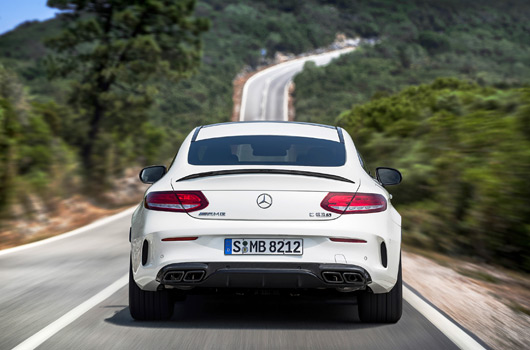 The new Mercedes-AMG C 63 Coupé: The sportiest C-Class ever

Affalterbach, Aug 20, 2015. Mercedes-AMG is setting a further landmark in the brand history: the new C 63 Coupé is the next step on the way to yet more technical and visual distinctiveness. The far-reaching technical modifications are evident at first sight: strikingly flared front and rear wheel arches, an increased track width and larger wheels give the Coupé a muscular look while at the same time providing a basis for the highly agile longitudinal and lateral dynamics. The brand’s typical “Driving Performance” is taken to new heights also with the C 63 Coupé. The AMG 4.0-litre V8 biturbo engine with 350 kW (476 hp) or 375 kW (510 hp) is just as much a completely in-house development from Affalterbach as, for example, the sophisticated AMG RIDE CONTROL suspension with electronically controlled shock absorbers, the set-up of the AMG DYNAMIC SELECT transmission modes, the rear-axle limited-slip differential or the dynamic engine mounts.

The C-Class is Mercedes-AMG’s best-selling model series and forms the backbone of the company’s success. Since its launch in 2011, the Coupé version has steadily gained in significance, culminating with the C 63 AMG Coupé “Black Series”. “The new C 63 Coupé embodies our conception of progress: It offers impressive longitudinal and lateral dynamics at an extremely high level along with improved fuel economy,” says Tobias Moers, Chairman of the Board of Management of Mercedes-AMG GmbH. “In addition, we are making a bold visual statement with the muscular design. Our customers can therefore experience the progress with each of their senses: seeing, hearing, feeling and, above all, driving!” The Mercedes-AMG C 63 Coupé will celebrate its world premiere on 15 September 2015 at the Frankfurt International Motor Show (IAA). The market launch will begin in March 2016.

The Mercedes-AMG C 63 Coupé already fascinates at first glance with its impressive proportions. The expressive exterior design differs significantly from the Mercedes-Benz model, which shares merely the same doors, roof and boot lid. The powerful 8-cylinder engine, together with the increased track width on the front and rear axles, calls for a redesigned front end and a model-specific rear assembly as well as new side walls. The flared wheel arches make the AMG Coupé 64 millimetres wider at the front and 66 millimetres wider at the rear, enabling the vehicle to hug the road better.

The larger wheel arches allow the use of wider tyres (up to 255 millimetres on the front axle and up to 285 millimetres on the rear axle), contributing to improved lateral acceleration, traction and agility. Under the outer skin, the body structure has been reinforced in key areas to transfer and compensate the extreme longitudinal and lateral forces from the powertrain and suspension. There is also the model-specific rear axle carrier.

The 60-millimetre-longer aluminium bonnet is adorned by two distinctive powerdomes, which are among the typical distinguishing features and underscore the muscular appearance. The extremely wide front section is characterised by large air inlets and precisely positioned flics. The low, arrow-shaped “twin blade” radiator grille with AMG lettering visually lowers the vehicle’s centre of gravity. The typical AMG “A-wing” front spoiler is three-dimensional, also serving as an air deflector for the three cooling air inlets. Additional flics ensure an optimal flow of air to the cooling modules. And a front splitter at the bottom of the front apron helps to reduce front-axle lift.

The side line, too, presents an entirely unique face thanks to the large wheels, which finish flush with the body on the far outside, and the special side skirts. The lateral inward step from door to sill lends additional emphasis to the wide base. Added benefit of the newly designed body elements: no compromises were required with regard to the connection of the aprons and other components: every joint and light-catching contour blends in harmoniously with the overall design. In the diagonal view from behind, the muscular line from roof to shoulder via side wall and wheel cutout looks especially impressive, lending emphasis to the impression of an intricately modelled sculpture with alternating light reflections. Fine detail: in typical sports car fashion, the exterior rear-view mirrors are mounted on the door rather than in the mirror triangle.

Taking its inspiration from the S-Class Coupé, the completely redesigned rear end includes a diffuser insert that revives a typical feature from the world of motor sport. The special design of the laterally positioned, optical air outlet openings improves the rear air flow, allowing it to break away with aerodynamically advantageous precision. Features such as the narrow rear reflectors reinforce the impression of width. The two chrome-plated twin tailpipes of the AMG exhaust system are perfectly integrated into the diffuser. The boot lid includes a narrow spoiler lip in the form of a sharp blade. It not only looks elegant, but also significantly reduces the rear-axle lift.

Carefully selected, high-grade materials with a pleasant touch and precision workmanship produce a level of perceived quality that is rare even in higher vehicle classes. Numerous AMG-specific controls underscore the motor sport heritage. As an alternative to the standard sports seats in ARTICO/microfibre DINAMICA man-made leather, Performance seats are also available: these allow the occupants a lower seating position and are more strongly contoured for increased lateral support.

Also as regards its engine, the C 63 Coupé occupies an exceptional status among the competition, being the only vehicle in the segment to boast an 8-cylinder biturbo engine. Mercedes-AMG thus meets the wishes of those customers who desire a combination of a highly emotive, unmistakable engine sound and torquey power delivery.

The driver also benefits from the unrivalled performance: the C 63 S Coupé accelerates from 0 to 100 km/h in 3.9 seconds, the C 63 Coupé in 4.0 seconds. This makes the Coupé just a fraction faster than the Saloon – thanks to the wider tyres and shorter-legged rear-axle ratios. The top speed is 250 km/h (electronically limited; 290 km/h with AMG Driver’s Package).

The 4.0-litre 8-cylinder biturbo engine is already used in the C 63 Saloon and the C 63 Estate. It is also installed in the GT sports car with dry sump lubrication. Characteristic feature: the two turbochargers are positioned not on the outside of the cylinder banks, but between them in the “V” – experts call this a “hot inside V”. The main advantages of this design are the compact engine construction, optimal response and low exhaust gas emissions.

The typical V8 engine sound was likewise a key development goal. It was specially tailored to the Coupé. A model-specific exhaust system with flap technology is used as standard. It is automatically map-controlled depending on the AMG DYNAMIC SELECT transmission mode, the power demanded by the driver and the engine speed. The engine sound varies between discreet/suitable for long-distance driving and robust/emotively appealing. Optionally available is the Performance exhaust system, which allows the sound to be modulated at the press of a button. In any case, the exhaust systems are so designed that all noise limits are at all times complied with irrespective of the flap position.

The transmission plays a major part in the direct and sporty character of the new Mercedes-AMG C 63 Coupé. The AMG SPEEDSHIFT MCT 7-speed sports transmission impresses with its tailor-made dynamics and high variability. Whether automatic or initiated by the driver using the steering wheel shift paddles, upshifts and downshifts are executed noticeably faster than in the previous model. This increased spontaneity is made possible by an even sportier set-up of the engine and transmission parameters.

The fascinating agility and high cornering speed of the C 63 Coupé are also thanks to the completely redesigned suspension. A four-link front suspension with radial, racing-style brake connections is used. Model-specific steering knuckles and a wider track allow greater lateral acceleration. The rear axle, too, was completely newly developed for the Coupé. The multi-link concept impresses with highly precise wheel control and increased stiffness. The AMG-specific rear axle carrier makes the increased track width possible; the contact surfaces of the wheel bearings were moved a further 25 millimetres towards the outside in comparison with the Saloon. Other measures include AMG-specific wheel carriers, stiffer elastokinematic tuning and higher negative camber.

With the AMG RIDE CONTROL suspension with adjustable damping, the customer can choose between maximum sportiness and excellent long-distance comfort in three stages at the press of a button. The difference between the comfortable and sporty suspension settings is also subjectively perceptible – depending on the particular driving situation.

Rear-axle limited-slip differential: optimal traction, including on the race track

The greatest benefit of the electronic rear-axle limited-slip differential – installed as standard on the C 63 S – is the even more sensitive and faster control, which further raises the critical limit of driveability. The 3-stage ESP® with “ESP ON”, “ESP SPORT Handling Mode” and “ESP OFF” settings works in perfect unison with the rear-axle limited-slip differential and is optimally tuned to the outstanding dynamics.

The driver is able to influence the characteristics of the C 63 with four different AMG DYNAMIC SELECT transmission modes. The C 63 S has an additional “Race” transmission mode. There is therefore scope for maximum individualisation. The driver decides on the desired driving experience, from comfortable-economical to super-sporty, using a controller to the left of the touchpad. The driver can choose between various preconfigured transmission modes and an “Individual” mode that the driver can to a large extent personally configure.

Unique in its segment, the C 63 S Coupé – like the Saloon and the Estate – is equipped with dynamic engine mounts. These help to further resolve the conflicting aims of comfort and dynamic performance. These dynamic mounts are instantly and variably able to adapt their stiffness to the driving conditions and requirements. Soft engine mounts improve comfort, as they provide more effective decoupling of noise and vibration. However, handling and agility benefit from a generally stiffer mount set-up. These measures enhance the vehicle’s precision when driven dynamically. For example, the steering response and feedback are even more direct.

Safety of the highest calibre

The Coupé also offers a supreme level of safety. It comes as standard with the ATTENTION ASSIST drowsiness detection system and COLLISION PREVENTION ASSIST PLUS, which helps to prevent rear-end collisions. Many other optional assistance systems are available to increase both comfort and safety.